By Glen Schultz, May 3, 2020, in his Kingdom Education Ministries blog

Why are Christian parents, pastors and church leaders unwilling to address the issue of education biblically?

Having been asked this so many times and trying to prayerfully answer it, I have come to the conclusion that the main reason this isn’t happening is DUALISM! This is a term that I first read about in the late Dr. Albert Greene’s book, Recapturing the Future of Christian Education. 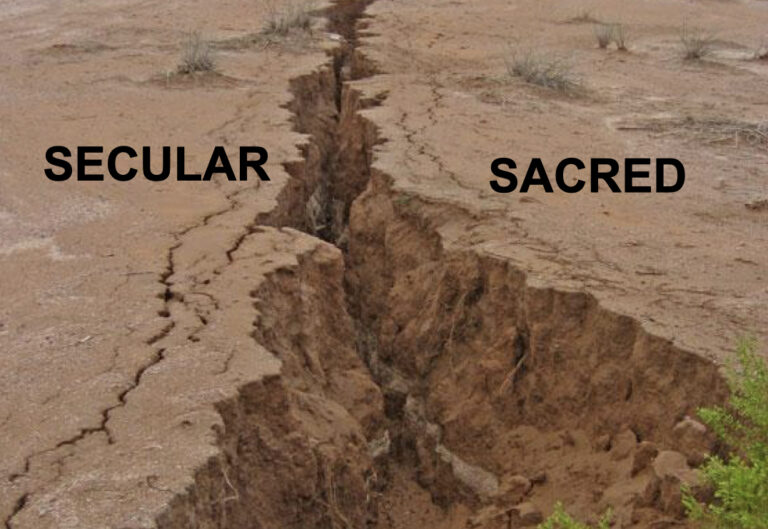 This same concept is also referred to as the secular/sacred divide and compartmentalization. Those who tie this practice back to ancient Greek philosophers might refer to it as a two-story approach to life.

Simply put, dualism is the practice of dividing one’s life up into two separate compartments—the secular and the sacred and then living each compartment from a different worldview perspective. The result is a fragmented life that has no ultimate meaning. Life simply cannot make sense when dualism is present.

Last week I read a challenging article by Dr. Jim Denison. In the article Denison makes this statement.

Dualism is the practice of dividing one’s life up into two separate compartments; the secular and the sacred and then living each compartment from a different worldview perspective.

He went on to state,

We have inherited it (from ancient Greece and Rome) in a much more subtle fashion with our gods of Sunday religion and Monday secularism.

Do you see the dualism in his statements? We live life by our Sunday worldview and our Monday through Saturday worldview. I have thought that this dangerous way of trying to live life by two different belief systems was somewhat new. However, it has caused man problems ever since the Fall.

I am currently reading through 1 and 2 Kings during my quiet time. As I was studying 2 Kings 17, it hit me. Dualism was a problem during the time of the kings of Israel.

Israel had fallen to the Assyrians and were taken captive. The king of Assyria sent some of his people to inhabit the cities of Samaria. When these pagan worshippers arrived in Samaria, the Lord sent lions that attacked and killed some of them.

We have inherited it in a much more subtle fashion with our gods of Sunday religion and Monday secularism.</>

Some priests who had been taken into captivity were sent back to Samaria and they taught them (Assyrians) how they should fear the Lord. When I first read this, I found it fascinating that these pagan worshippers recognized that they needed to know the customs of the “god” of Israel. However, they didn’t want to leave their way of life all together in order to follow God. Here is what happened.

However every nation continued to make gods of its own, and put them in the shrines on the high places which the Samaritans had made. 2 Kings 17:29 (NKJV)

The Scriptures go on to describe what became the way of life for these Assyrians after the priests taught them how to fear the Lord.

Here dualism is clearly described in Scripture. They tried to both fear the Lord YET serve their own gods. They attempted to live according to two worldviews or religions. When I saw this, I realized that even the kings of Judah who did right in the sight of the Lord were guilty of adopting a secular/sacred divide in their lives. One example of how a “good” king tried to live with a dualistic belief system is Jehoash.

Jehoash did what was right in the sight of the Lord all the days in which Jehoiada the priest instructed him. But the high places were not taken away; the people still sacrificed and burned incense on the high places. 2 Kings 12:2-3 (NKJV)

This dangerous lifestyle was repeated by other kings such as Jotham (see 2 Kings 15:34-35). I was amazed at how, time and time again, kings would tear down the altars and statues of Baal and Asherah but they allowed the “high places” to remain. Of course, in every one of these cases God was not pleased and eventually brought judgement on the nation.

Unfortunately, we have not learned from the poor examples like I just mentioned. I agree with Denison that Christians no longer are “setting up a figured stone in our land.” However, we are too often guilty of worshipping God on Sunday and then trusting and serving our secular gods where appropriate during the rest of the week.

I am as guilty of this as the next person. There are those areas of my life that I find that I have yet not surrendered to a biblical worldview. As long as they remain, I am like the Assyrians in 2 Kings 17. I want to “fear God” so I am protected from lions. But I also want to fit into the culture by continuing to live my “secular” life just like everyone else.

We are too often guilty of worshipping God on Sunday and then trusting and serving our secular gods where appropriate during the rest of the week.

In fact, I realize that when I come under conviction for the dualism in my life, instead of tearing down the high places and surrendering them to a biblical worldview, I do something very subtle but still sinful. I will try to intensify my “Sunday life” so that I can still live out the secular side of my life with less guilt.

God will never work the work that He wants to do in, through and around us as long as we are not fully following Him in every area of our lives. The question we must ask ourselves today is this.

Am I guilty of fashioning gods of Sunday religion and Monday secularism?

It is imperative that we develop a biblical worldview and allow it to direct our thinking and acting in every area of life throughout every day of life.

What are the benefits of being a registered user?